Drinking the night away... 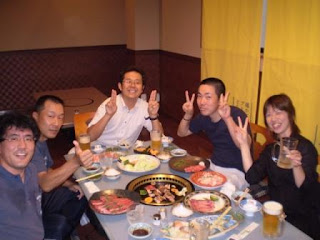 Well I did it... I survived my first proper Japanese drinking party! Last night my Board of Education held a welcome reception for me at the local ‘Yakiniku’ (ya-ki-ni-ku) which is a traditional Japanese style BBQ restaurant.
I have to admit to being pretty nervous before hand because I’d heard some pretty terrible horror storiesabout what they can be like and the pressure you can be under to keep drinking.Luckily for me, mine seemed relatively tame in comparison to some others... although there were a few moments where it felt very much touch and go!
The whole idea of a drinking party here is to drink as much as you can, as fast as you can... a concept that would be disastrous back in NZ, but here in Japan these parties are very much part of their culture. The format for the evening started off fairly formal with us all being allocated a seat according to rank (of course the tables were all on the floor so we sat on little cushions). Because I was the guest of honour I was seated opposite the head honcho of the Board of Education and next to the second head honcho with the other office workers all slotting into their respective rank. A few speeches followed and then it was time to relax and have fun trying to talk to everyone... who were busy sculling beer, copious amounts of s 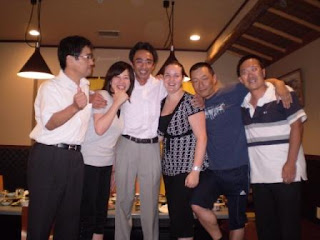 ake, whisky and any other alcoholic drink you can think of!
The table was covered with platters of meat (ranging from beef, chicken, cow’s tongue and chicken cartilage), a whole array of vegetables and various forms of pickles, sauces and dishes. At each end of the table there were big round pits that had netting over them and a large gas cooker underneath... the idea being that you all cook your own food... some would suggest this isn’t the smartest idea when everyone is drinking as was illustrated later in the night with someone starting a small fire!As the hours ticked by everyone around me got drunker and drunker, louder and louder and braver and braver at actually trying to talk to me. 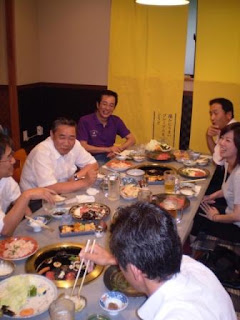 Unfortunately for me that wasn’t the only way in which they got braver as before long I had several of the men lining up to grab my boobs, touch my face, arms and legs and tell me how beautiful I was.... I think there might have even been a few I love you’s.
The real hilarity started when the head honcho guy (who was so ridiculously drunk) decided he wanted to sing me a song while holding my hand far too tight and rubbing my face, all the while still throwing back the sake! My laughter was very much nervous laughter but everyone else thought it was the funniest thing ever!
It was then time to get my own back by making everyone stand up and form a circle and do the ‘Hokey Pokey’... again great hilarity ensued. By the end of the night people were stumbling and fumbling all over the place but all seemed to have had a great time.
Even I’m willing to admit it was pretty fun... although the key for me was most definitely knowing when to stop politely sipping my beer in exchange for water!The next morning at work... very much business as usual... although I have seen a few of them clutching their heads and making several trips to the bathroom!

Posted by Megan and Nathan at 9:54 PM 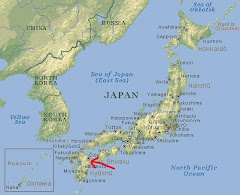 Where in the world

Who's checking us out??